Skip to content
Loading...
How A Small School In Rural Zambia Will Finally Get Electricity
7 Water And Energy Conservation Strategies For Large Families
How 200 Solar Lights Found Their Way To A Small School In Rural Zambia
Ørsted Consolidates Customer Solutions & Bioenergy Divisions
India’s NTPC Limited Offers Solar Power Project Management Services To ISA Members
5 Tips to Make Your First Bike Commute to the Office a Successful One
Congress Charges Ahead on Energy Storage: (BEST) Act
First Round of 15 Winners of Reinventing Cities Competition Announced, Creating New Beacons of Sustainable Design & Construction
5 Major UK Businesses Powered by Renewable Energy
Buy An Electric Car And Save The Planet! Not So Fast, Consider The Alternatives First
Why Do Republicans Now Hate On Christian Morals, National Security, Democracy, The US Constitution, The Rule Of Law, The FBI, The CIA, Honesty, & The US Deficit?
Don The Con & Crew Creating Alternative Reality That Is Almost Completely Fake
Nasty Gas Smells In Long Beach Launch AQMD Long-Term Investigation — We’re There, And It’s About Time!
Dirty Energy & FuelGreen CarsGreen Your LifeRenewable EnergyTransport & Travel 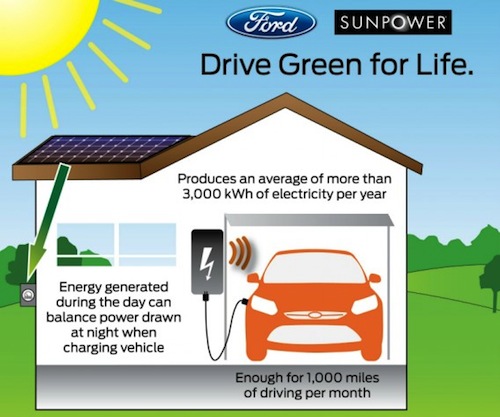 Ford recently rolled out the Ford Focus Electric to little fanfare or media buzz. But Ford has actually given us something pretty big to talk about. It has partnered with SunPower, one of the largest solar companies in the United States, to offer purchasers of the electric car a great deal. Buy a Ford Focus Electric and you can get a home solar panel installation from SunPower for less than $10,000.

The program is called “Drive Green For Life” and works with the premise that buying a solar array for your home will offset the costs of your EV for the rest of your driving life. The costs of EV ownership will be even lower because of the highly efficient solar panels on the roof of your home. Not to mention the fact that if you drive less than the national average, you’ll be saving money on your home electric bills as well.

Here are some SunPower details:

“The 2.5 kilowatt rooftop solar system is comprised of the SunPower® E18 Series solar panels that produce an average of 3,000 kilowatt hours of electricity annually. These high-efficiency solar panels generate approximately 50 percent more electricity than conventional panels and utilize a smaller footprint on the roof. The system was sized to accommodate a customer who drives about 1,000 miles per month.”

The discount varies from state to state depending on the tax credits available in your area, but SunPower guarantees that the bill will come to less than $10,000 before taxes. The price tag still isn’t cheap, but you need to compare the costs to that of traditional gasoline cars in order to get a sense of the big picture.

The average American driver uses 558 gallons of gasoline a year. At $3.80 per gallon, that averages to be around $2,100 annually. Drive an EV coupled with your home solar array and you’ll break even in five years. And don’t forget, the solar panel system is guaranteed by SunPower for twenty-five years. Most importantly, your car will be using clean energy no matter where you drive.

Even if the Ford-SunPower deal isn’t affordable for everyone, it marks a progressive turn in thinking for auto manufacturers and the solar power industry. The marketing seems aimed at drivers who are already committed to driving EVs; however, the partnership demonstrates how we need to move forward systematically.

As clean energy grows in necessity and popularity, home owners will be demanding more green systems in place at home as well as on the roads. Ford and SunPower seem to have their eye on this near future and are helping drivers to get there now.