Skip to content
Loading...
How A Small School In Rural Zambia Will Finally Get Electricity
7 Water And Energy Conservation Strategies For Large Families
How 200 Solar Lights Found Their Way To A Small School In Rural Zambia
Ørsted Consolidates Customer Solutions & Bioenergy Divisions
India’s NTPC Limited Offers Solar Power Project Management Services To ISA Members
5 Tips to Make Your First Bike Commute to the Office a Successful One
Congress Charges Ahead on Energy Storage: (BEST) Act
First Round of 15 Winners of Reinventing Cities Competition Announced, Creating New Beacons of Sustainable Design & Construction
5 Major UK Businesses Powered by Renewable Energy
Buy An Electric Car And Save The Planet! Not So Fast, Consider The Alternatives First
Why Do Republicans Now Hate On Christian Morals, National Security, Democracy, The US Constitution, The Rule Of Law, The FBI, The CIA, Honesty, & The US Deficit?
Don The Con & Crew Creating Alternative Reality That Is Almost Completely Fake
Nasty Gas Smells In Long Beach Launch AQMD Long-Term Investigation — We’re There, And It’s About Time!
ActivismBicycleGreen Your LifeTransport & Travel 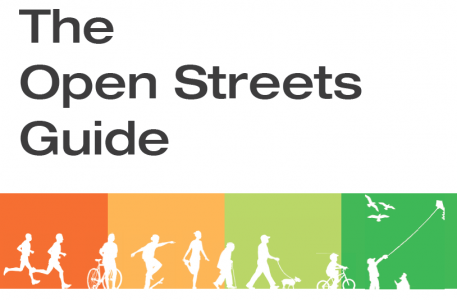 Ever wish you had some car-free streets in your city or town? At least once or twice a week? More and more cities across the U.S. and across the world are getting them, with the temporary street closings (i.e. once a week or once a month) commonly referred to as ciclovias. In the past 6 years or so, North America has gone from 11 cities having ciclovias to 70 cities having them.

To help even more cities and towns go car-free, the Alliance for Biking & Walking and the Street Plans Collaborative have teamed up to create a report highlighting best practices from 67 of those localities.

The Open Streets Guide was released just last week. “The guide breaks down U.S. and Canadian initiatives into seven model types, based on how they’re funded and who’s in charge, and zeroes in on best practices taken from initiatives in North and South America. It also includes some fascinating statistics, like average route length (3.95 miles), population served (28 percent of open streets occur in cities of less than 100,000 people) and funding (52 percent of open streets initiatives are paid for by a public-private partnership),” Streesblog DC summarizes.

The guide groups open streets projects by a few dominant models. For example, Seattle’s Bicycle Sunday, the longest-running open streets project in North America, first set the example of a parkway ride in 1965 with its three-mile stretch of car-free roadway on Lake Washington Boulevard. It took until 2006 for the model of an unstructured, open event to be revolutionized — and it was the city of Cleveland that did it, by instituting programmed activities in the streets.

Kentucky made open streets history in 2008 with its public/private Second Sunday program explicitly aimed at combating the state’s obesity epidemic. (It’s the fifth-fattest state in the union.) San Francisco’s “People’s Day in the Park” was kind of a dud for the first ten years of its existence, until roller skate vendors opened up in 1977, turning the weekly event into a skaters’ paradise. And if you’ve ever been to a reclaimed-street event, you know they’re boisterous times, but Phoenix calls its car-free park program “Silent Sundays” in honor of the quieting of automobile noise.