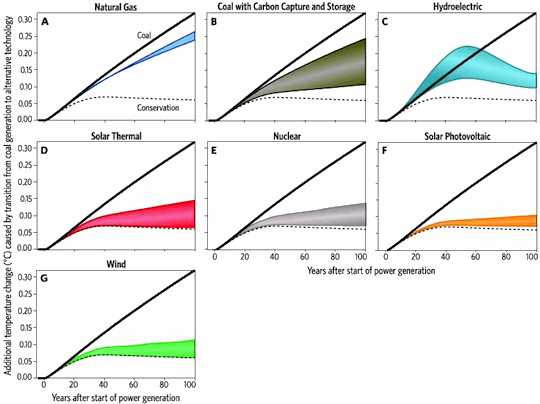 A couple days ago, over on sister site CleanTechnica, I reposted a Grist piece on a new study by former Microsoft executive Nathan Myhrvold and climate scientist Ken Caldeira. The post and new study were about what energy transition is needed to address global warming this century. The basic conclusions of it all (also discussed in the video above of the Caldeira) are this:

First, substantially affecting global temperature in the first half of the century is all but impossible; even to secure temperature reductions in the second half of the century, a rapid transition to clean energy needs to begin immediately. Second, lower-carbon energy — like, say, natural gas — just won’t do it. If we transitioned to something with half of coal’s emissions, it would take more than a century to produce even a 25 percent decline in CO2 relative to the status quo baseline. By then we’d be cooked.

In summary, Myhrvold and Caldeira have shown in pretty stark terms that, if we’re not willing to substantially reduce population growth or economic growth, we’re going to need an absolutely gargantuan amount of zero-carbon energy, without delay.

Yep, zero-carbon energy, as in wind, solar PV, solar thermal, geothermal (not in the image below), and perhaps also nuclear energy.

More from the study authors:

Despite the lengthy time lags involved, delaying rollouts of low-carbon-emission energy technologies risks even greater environmental harm in the second half of this century and beyond. This underscores the urgency in developing realistic plans for the rapid deployment of the lowest-GHG-emission electricity generation technologies. Technologies that offer only modest reductions in emissions, such as natural gas and — if the highest estimates from the life-cycle analyses are correct — carbon capture and storage, cannot yield substantial temperature reductions this century. Achieving substantial reductions in temperatures relative to the coal-based system will take the better part of a century, and will depend on rapid and massive deployment of some mix of conservation, wind, solar, and nuclear, and possibly carbon capture and storage.

Reiterated by the Institute of Physics news release:

… technologies that offer only modest reductions in greenhouse gases, such as the use of natural gas and perhaps carbon capture and storage, cannot substantially reduce climate risk in the next 100 years.

Delaying the rollout of the technologies is not an option however; the risks of environmental harm will be much greater in the second half of the century and beyond if we continue to rely on coal-based technologies.

Climate Progress’ Joe Romm has more on the significance of this study (one of the most interesting things to note is who conducted it,… well, one of the authors, and his former stance on the matter):

These results are not entirely news to people who follow the recent climate and energy literature, which I’ve written about at length — see “NCAR Study: Switching From Coal to Gas Increases Warming for Decades, Has Minimal Benefit Even in 2100.” The fact that natural gas is a bridge fuel to nowhere was first shown by the International Energy Agency in its big June report on gas — see IEA’s “Golden Age of Gas Scenario” Leads to More Than 6°F Warming and Out-of-Control Climate Change.

But what’s new is the first peer-reviewed analysis that “has predicted the climate effects of energy system transitions” with “a quantitative model … that includes life-cycle emissions and the central physics of greenhouse warming.”

What’s also remarkable about this study is the lead author, Nathan Myhrvold. You may recall Myhrvold, the former CTO of Microsoft, from his anti-clean-energy and pro-geoengineering quotes in”Error-riddled book Superfreakonomics,” which I and many, many others debunked at length in 2009.

Myhrvold was quoted back then about the “carbon debt” of the clean energy build-out: “Eventually, we have a great carbon-free energy infrastructure but only after making emissions and global warming worse every year until we’re done building out the solar plants, which could take 30 to 50 years.”

Of course, not noted in all of this is energy efficiency and the economy’s role in all this. The study assumes constantly rising energy demand. We’ll see about that. Also, we’d be wise to invest a LOT more money in energy efficiency — it’s critical to a clean… clean energy transition.

For more, the study, published in the Institute of Physics’ journal Environmental Research Letters, is “Greenhouse gases, climate change and the transition from coal to low-carbon electricity.”