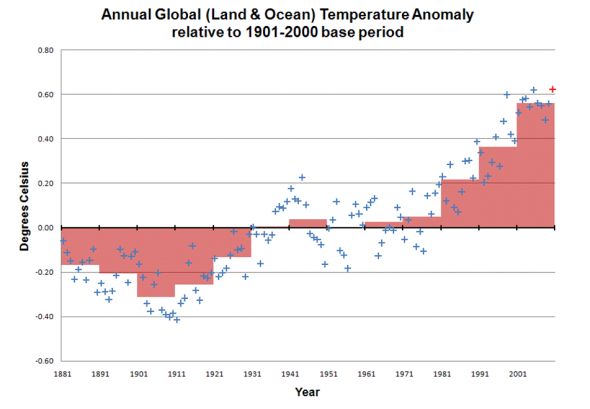 The Wall Street Journal (WSJ) published a horrid op-ed last week on the inane idea that global warming doesn’t pose any threat to us and we don’t need to do anything about it.

Top sites Media Matters and Skeptical Science quickly counter-argued the nonsense put forth in the WSJ piece with some thoughtful pieces looking at the simple facts of the matter and the bias of the op-ed contributors.

“After reportedly rejecting a climate change essay by 255 members of the National Academy of Sciences in 2010, the Wall Street Journal has published a flawed op-ed by 16 scientists and engineers instructing public officials not to fight manmade global warming. But most of these individuals do not actually conduct climate research, and their credibility is further undermined by the misleading and unscientific arguments presented in the op-ed,” Media Matterswrites in its intro. The site’s piece is aptly titled, “The Journal Hires Dentists To Do Heart Surgery.”

Media Matters continues on: “Of the 16 scientists who signed the op-ed, no more than 4 have published peer-reviewed research related to climate change, according to the Scopus database. While they may be prominent in their own fields, their credibility on the science of global warming is not comparable to that of researchers who specialize in this area. For instance, Jan Breslow is a physician, Burt Rutan is a retired airplane designer, Harrison Schmitt is a retired astronaut and former Republican politician, and Edward David is a retired electrical engineer, among others whose expertise lies elsewhere. ”

“Nearly half of the list (at least 7 of 16) have received fossil fuel industry funding, and the list also includes an economist, a physician, a chemist, an aerospace engineer, and an astronaut/politician,” Skeptical Science adds. “These are apparently the best and brightest the climate denialists can come up with these days?”

The especially funny (read: absurd) thing about this WSJ op-ed is that it is on the same matter as an op-ed written by 255 Members Of The U.S. National Academy Of Sciences (that was actually based in the scientific consensus) that the publication rejected. Peter Gleick covers that over on Forbes.com.

But, more from Media Matters on the fossil fuel connections: “Six Of The Scientists Have Been Linked To Fossil Fuel Interests. Roger Cohen and Edward David are both former employees of ExxonMobil. William Happer is the Chairman of the Board for the George C. Marshall Institute, which has received funding from Exxon. Rodney Nichols is also on the boards of the George Marshall Institute and the Manhattan Institute, which has been funded by Exxon and the Koch Foundations. Harrison Schmitt was the Chairman Emeritus of the Annapolis Center for Science-Based Public Policy, which was funded by oil refiners and electric utilities in the 1990s, according to a Wall Street Journal report (via Nexis). Richard Lindzen also served on the Economic Advisory Council of the Center, was funded by ExxonMobil through the 2000s.”

For more on the absurd claims these folks have made about all manner of things, from HIV/AIDS, to second-hand smoke risk, to U.S. government going sociaist, check out the Media Matters piece linked above.

Something denier trolls and bots commenting here on Planetsave like to say is that their side is growing. To be honest, haven’t noticed that, even in the comments here.

From the WSJ op-ed: “…a large and growing number of distinguished scientists and engineers do not agree that drastic actions on global warming are needed.”

“The fact that only 16 scientists and engineers signed this letter casts serious doubt on this assertion.  The fake skeptics were able to get ~100 signatories on a similar letter 5 years ago – this seems more like a small and dwindling number of fake skeptics,” Skeptical Science chimes in.

Should You Listen to a Dentist When You Have Heart Trouble?

And this is the real point, one far too often overlooked. “If I need heart surgery, I’m not going to allow a dentist to perform it, even if it’s the best dentist in the world.  Virtually all of the climate science experts agree that actions to address global warming are needed.  Their informed opinions are the ones we should heed when it comes to climate science, not those of astronauts and physicians.”

Media Matters included a good section on the either ignoble or ignorant claims the writers made regarding climate science and global warming, including the graph above, but I’m going to shift over to Skeptical Science‘s coverage of that to continue on here. The remainder of this piece, in fact, is straight from Skeptical Science (I don’t want to stick it all in block quotes, as that would make it harder to read and knock the images off center). So, enjoy this partial repost from that top site, if you actually care about the science:

The first myth in the article is the well-worn “global warming stopped in [insert year]“.  In this case, the fake skeptics have inserted “the last 10 years.”  This myth is easily debunked with the escalator graphic (Figure 1).

The second myth is that Kevin Trenberth’s quote-mined comment “The fact is that we can’t account for the lack of warming at the moment and it is a travesty that we can’t” is an admission that global warming stopped.  In reality, the quote simply referred to the fact that while the planet is warming, we do not have adequate global monitoring to determine where all the heat is going.  However, recent research by Loeb et al. (2012) has concluded that there may no longer be any “missing heat,” so this particular myth really has no leg to stand on.

The denialist op-ed continues to confuse the issue by claiming

“…the warming is only missing if one believes computer models where so-called feedbacks involving water vapor and clouds greatly amplify the small effect of CO2.”

Aside from continuing to misunderstand that the “missing heat” is about having an inadequate global climate observational network (mainly because we don’t have good measurements of deep ocean heat), observational data have demonstrated that water vapor, and likely clouds, are indeed positive feedbacks.

Earth Has Warmed as Expected

The fake skeptics then repeat one of Lindzen’s favorite myths, that the Earth has warmed less than predicted by the IPCC.  This is simply untrue – in fact, the IPCC climate predictions have been amongst the most accurate thus far, much better than Lindzen and his fellow fake skeptics have done (Figure 2).

CO2 is a Pollutant and Not Necessarily Beneficial for Plants

The op-ed then repeats the old “CO2 isn’t a pollutant” myth.  In reality, because its emissions endanger public health and welfare through its impacts on climate change, by definition CO2 is a pollutant according to the US Clean Air Act.

They couple this with the grossly oversimplistic “CO2 is plant food” myth.  While it’s true that in a controlled setting like a greenhouse, increased CO2 levels will generally improve plant growth, the global climate is not so simple.  Increasing CO2 in the climate also changes temperatures, precipitation, drought and flood frequencies, and a number of other factors which impact plant growth.

The global increase of CO2 is a grand biological experiment, with countless complications that make the net effect of this increase very difficult to predict with any appreciable level of detail.  To gloss over these complexities with the simplistic “CO2 is plant food” argument is an insult to the readers’ intelligence.  It also ignores the other adverse impacts of increasing CO2, like ocean acidification.  Apparently these “concerned scientists” don’t think very highly of their audience.

Just when we thought the op-ed letter couldn’t get worse, these fake skeptics have the gall to suggest that we “follow the money,” because climate “alarmism” supposedly brings bountiful research funding, “an excuse for governments to raise taxes”, “big donations” for environmental groups, and other similar tinfoil-hattery.  Considering that at least 43% of the letter’s signatories have received money from the fossil fuel industry, being given large sums of money just for being climate “skeptics” and publishing error-riddled nonsense like this op-ed, the sheer nerve it must have taken to make this “follow the money” argument is astounding.  Do follow their advice: research the signatories of this letter and follow their money trail, which leads straight to the fossil fuel industry.

CO2 Limits Will Help the Economy

The “concerned scientists” then follow with the myth that CO2 limits will harm the economy.  This particular myth is primarily based on ignoring the fact that failing to reduce greenhouse gas emissions will have a tremendous cost, much greater than the cost of action (Figure 3).  Relative to the alternative (inaction and trying to adapt to the damaging consequnces of climate change), CO2 limits will help the economy.  This is why there is a consensus among economists with expertise in climate that we should put a price on carbon emissions (Figure 4). Figure 4: New York University survey results of economists with climate expertise when asked under what circumstances the USA should reduce its emissions

The article references work by economist William Nordhaus to try and justify climate inaction.  When we actually listen to what Nordhaus has to say, the picture looks very different:

“We’ve got to get together as a community of nations and impose restraints on greenhouse gas emissions and raise carbon prices. If not, we will be in one of those gloomy scenarios.”

Although he tends to be quite conservative about the costs of climate change relative to other economists, Nordhaus still supports putting a price on carbon emissions.  Nordhaus not appreciate his name being invoked to justify foolish calls for climate inaction,telling Andrew Revkin:

“The piece completely misrepresented my work. My work has long taken the view that policies to slow global warming would have net economic benefits, in the trillion of dollars of present value. This is true going back to work in the early 1990s (MIT Press, Yale Press, Science, PNAS, among others). I have advocated a carbon tax for many years as the best way to attack the issue. I can only assume they either completely ignorant of the economics on the issue or are willfully misstating my findings.”