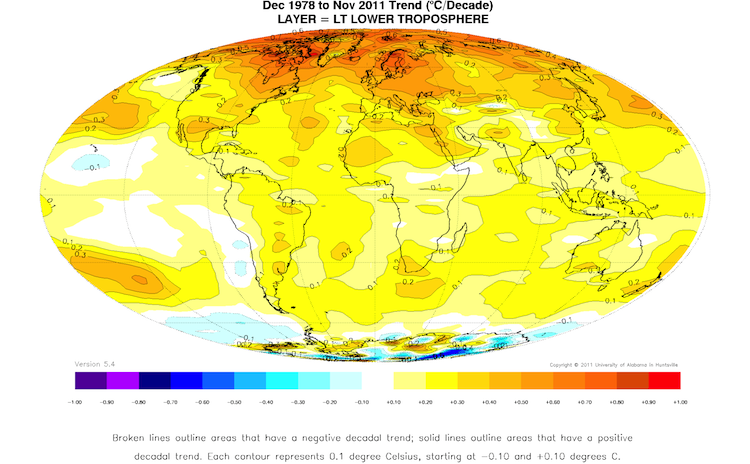 Roy Spencer and Doug Christy have been debunked too many times no. It’s sad they keep promoting the same nonsense. It’s as if they don’t even want to know the truth. Or they know the truth, but are addicted to the attention the get from being climate science rogues. Rather than spend the time on them myself here, I’m just going to repost Andrew Freedman’s nice post from Climate Central on their latest pushing of long-debunked myths (more from Freedman and leading climate scientists is available on the Washington Post via the link on the bottom):

Sometimes, covering climate science feels like playing a neverending game of whack-a-mole, since the same dubious arguments — often put forward by the same people — pop up again and again, only to be repeatedly debunked. Today is no different. Over at the Washington Post’s Capital Weather Gang blog, I have a column responding to a press release issued late last week marking the 33rd year of temperature data from the lower atmosphere, as detected by satellites.

The release, from John Christy and Roy Spencer at the University of Alabama at Huntsville, made several claims that were misleading at best, including the argument that because climate models don’t accurately simulate temperature trends in the lower atmosphere compared to the surface, our understanding of global warming is seriously flawed.

As I show, that argument was contradicted by a federal science assessment back in 2006, for which both Spencer and Christy served as coauthors.

Lower tropospheric temperature trends around the globe since December 1978 expressed in degrees per decade. Only portions of the Antarctic, two areas off the southwestern coast of South America, and a small region south of Hawaii have cooled during this period. Credit: University of Alabama-Huntsville.

That report found: “Given the range of model results and the overlap between them and the available observations, there is no conflict between observed changes and the results from climate models.” As I note: “Moreover, a 2010 review of more recent research on this topic concluded: “There is no reasonable evidence of a fundamental disagreement between tropospheric temperature trends from models and observations when uncertainties in both are treated comprehensively.”

A second misleading claim that Christy and Spencer make is that it’s simply not possible to identify the human contribution to global warming, despite the publication of studies that have done just that. “While many scientists believe it [warming] is almost entirely due to humans, that view cannot be proved scientifically,” Spencer states.

Ben Santer, a climate researcher at Lawrence Livermore National Laboratory in California, said Spencer and Christy are mistaken. “People who claim (like Roy Spencer did) that it is “impossible” to separate human from natural influences on climate are seriously misinformed,” he wrote via email. “They are ignoring several decades of relevant research and literature. They are embracing ignorance.”

“Many dozens of scientific studies have identified a human “fingerprint” in observations of surface and lower tropospheric temperature change,” Santer stated.

Read the rest of the story, including more of Santer’s criticisms and the views of another leading climate scientist, at the Capital Weather Gang blog.