Each spring the ozone hole which hovers over Antarctica reaches its maximum, and on September 12 it stretched some 10.05 million square miles, the ninth largest stretch on record. More specifically, above the South Pole, levels of ozone dropped to the 10th lowest in its 26 year record.

“The upper part of the atmosphere over the South Pole was colder than average this season and that cold air is one of the key ingredients for ozone destruction,” said James Butler, director of NOAA’s Global Monitoring Division in Boulder, Colorado.

The ozone layer is one of part of Earth’s protection against harmful ultraviolet radiation, and along with the cold air, is depleted by chemicals that remain in the atmosphere and ice crystals on which ozone-depleting chemical reactions take place.

“The colder than average temperatures in the stratosphere this year caused a larger than average ozone hole,” said Paul Newman, chief scientist for atmospheres at NASA’s Goddard Space Flight Center in Greenbelt, Md. “Even though it was relatively large, the area of this year’s ozone hole was within the range we’d expect given the levels of manmade ozone-depleting chemicals that continue to persist in the atmosphere.”

“The manmade chemicals known to destroy ozone are slowly declining because of international action, but there are still large amounts of these chemicals doing damage,” added Butler.

The ‘international action’ that Butler speaks of is primarily the 1987 Montreal Protocol which started the process of removing our dependency on Hydrochlorofluorocarbons (HCFCs) and Chlorofluorocarbons (CFCs), or more easily, “Substances That Deplete the Ozone Layer”.

The Montreal Protocol has been working, but the ozone depleting chemicals are often long lived, and as a result the results will not necessarily be immediately obvious. 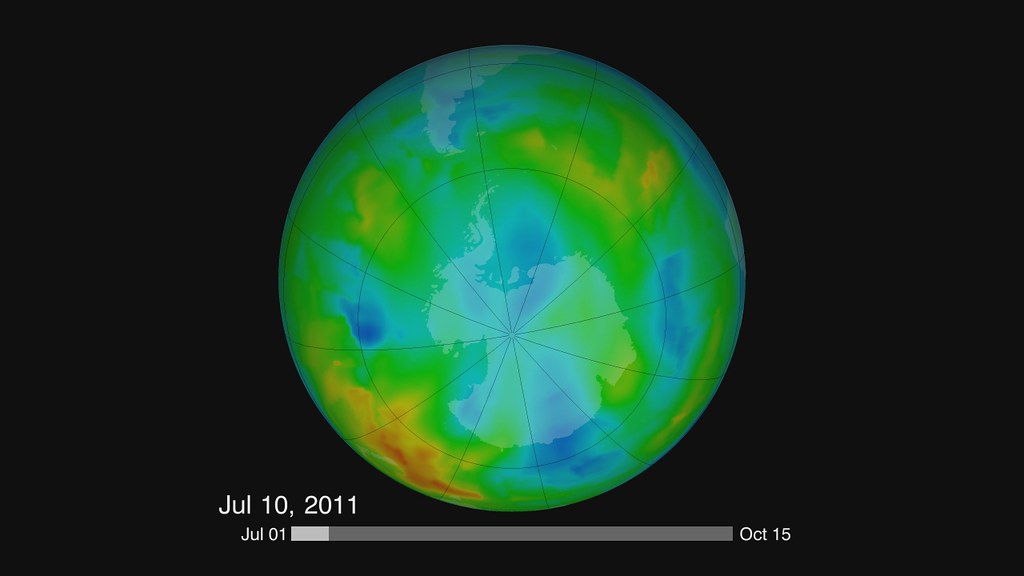 According to NASA’s Goddard Space Flight Center – who along with the National Oceanic and Atmospheric Administration have been partly responsible for monitoring the annual Antarctic ozone hole, global levels of ozone in the stratosphere and the manmande chemicals that contribute to ozone depletion – “computer models predict that stratospheric ozone could recover by midcentury, but the ozone hole in the Antarctic will likely persist one to two decades longer, according to the latest analysis in the 2010 Quadrennial Ozone Assessment issued by the World Meteorological Organization and United Nations Environment Programme, with co-authors from NASA and NOAA.”

NASA and NOAA use two different methods to monitor levels in the stratosphere.

NASA uses the Dutch-Finnish Ozone Monitoring Instrument, or OMI, on board the Aura satellite to measure ozone while the NOAA release balloon’s carrying instruments 18 miles into the atmosphere to collect “detailed profiles of ozone levels from the surface up.”

Researchers do not expect a smooth, steady recovery of Antarctic ozone, because of natural ups and downs in temperatures and other factors that affect depletion, noted NOAA ESRL scientist Bryan Johnson, who has been heading the “ozonesonde” group responsible for releasing the balloons for 26 years.

NASA’s satellite monitoring program will continue into the decades ahead with the launch of NASA’s National Polar-orbiting Operational Environmental Satellite System Preparatory Project, known as NPP, on October 28. The satellite will carry a new ozone-monitoring instrument known as the Ozone Mapping and Profiler Suite, which will be able to provide a more detailed daily and global ozone measurement than its predecessors.