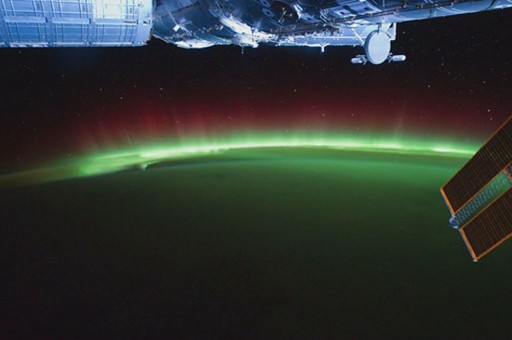 The images were taken as the ISS travelled across the southern Indian Ocean between 12:22 to 12:45 PM ET.

According to NASA, “his aurora appeared at lower latitudes due to a geomagnetic storm – the insertion of energy into Earth’s magnetic environment called the magnetosphere – caused by a coronal mass ejection from the sun that erupted on September 14. The storm was a moderate one, rated with what’s called a KP index of 6 on a scale that goes from 0 to 9, caused by just a glancing blow from the CME. As particles from the incoming CME moved into the magnetosphere they traveled around to the back side — or night side, since it is on the opposite side from the sun — of Earth and then funneled down onto Earth’s poles and even lower. As the particles bombarded oxygen and nitrogen in the atmosphere, the atoms released a photon of light that we see as the beautiful colors of the aurora.”