Skip to content
Loading...
How A Small School In Rural Zambia Will Finally Get Electricity
7 Water And Energy Conservation Strategies For Large Families
How 200 Solar Lights Found Their Way To A Small School In Rural Zambia
Ørsted Consolidates Customer Solutions & Bioenergy Divisions
India’s NTPC Limited Offers Solar Power Project Management Services To ISA Members
5 Tips to Make Your First Bike Commute to the Office a Successful One
Congress Charges Ahead on Energy Storage: (BEST) Act
First Round of 15 Winners of Reinventing Cities Competition Announced, Creating New Beacons of Sustainable Design & Construction
5 Major UK Businesses Powered by Renewable Energy
Buy An Electric Car And Save The Planet! Not So Fast, Consider The Alternatives First
Why Do Republicans Now Hate On Christian Morals, National Security, Democracy, The US Constitution, The Rule Of Law, The FBI, The CIA, Honesty, & The US Deficit?
Don The Con & Crew Creating Alternative Reality That Is Almost Completely Fake
Nasty Gas Smells In Long Beach Launch AQMD Long-Term Investigation — We’re There, And It’s About Time!
Climate ChangeDisasters & Extreme WeatherDroughtFloodsGlobal Warming 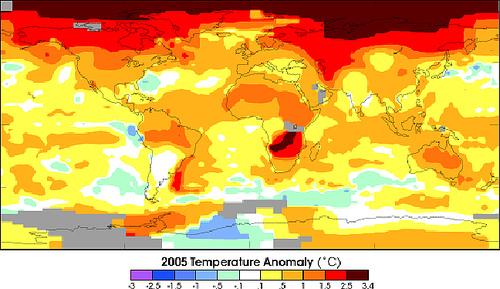 Can you guess which major media outlet made that analogy? NYTimes? No, it’s one of the worst sources of climate change news and commentary these days. Washington Post? If only! FOX News? OK, yes, that would be absurd — hope the idea made you laugh, at least.

It was actually from USAToday. And, from what I have seen, USAToday has been one of the best major media outlets when it comes to this topic, surprisingly.

Here’s more from the post I’m referencing in the title, which was published last week (emphasis added):

What’s happening is extraordinarily hot weather, centered in the Southern Plains. Oklahoma’s average temperature in July (88.9 degrees) was the hottest for any state for any month on record. Dallas is closing in on its record of 42 consecutive days of 100-plus degree weather. Newark set an all-time high of 108 on July 22. Washington, D.C., has had 24 days at 95 degrees or above, approaching the record of 28. Nationally, last month was the fourth hottest July on record, with communities in all 50 states setting high temperature records….

While scientists caution that no individual extreme weather event can be conclusively linked to global warming, this summer is consistent with computer-model predictions of hotter days, warmer nights and more severe droughts.

Here’s one way to think of it: The atmosphere is juiced like athletes on performance-enhancing drugs. During baseball’s steroid era, steroids didn’t turn singles into home runs. But what used to be fly balls to the warning track ended up over the fence.

Similarly, climate change and urbanization don’t cause heat waves and droughts so much as intensify them. So what used to be a 95-degree day can become a 100-degree day. Or what once was a 75-degree nighttime low can turn into an 80-degree night.

Well put. The article doesn’t stop there, though. It also digs into the commonly overlooked issue of those writing on climate inaction proponents — inaction will cost more than action.

…climate change skeptics and deniers — many of whom hail from Texas and Oklahoma, the epicenter of this summer’s misery — rarely discuss the price of inaction. If you accept that climate change is occurring, such costs are reflected in higher air conditioning bills and wilted crops.

According to a study by Tufts University researchers for the Natural Resources Defense Council, climate change will cost the average four-person household an additional $340 in energy costs in 2025, plus $2,950 for hurricane damages, real estate losses and water-supply costs.

Given the threats from global warming, a prudent society would begin moving aggressively to reduce carbon emissions and to develop cleaner energy sources. It would lead a global effort to reduce greenhouse gases because unilateral U.S. action won’t accomplish much unless it’s accompanied by reductions in developing nations such as China and India.

Again, well said and great that the author delved into this side of things. This is what far too many people don’t understand.

And, lastly, the author did a great job of tackling key points before the climate denier trolls started throwing trash into the comments:

Some 98% of climate scientists agree that global warming is real and is very likely caused primarily by human activity. The evidence continues to mount: Nine of history’s 10 hottest years have occurred in the past 13 years. In the USA, new high temperature records outnumbered low temperature records by more than 2-to-1 over the past decade. And the volume of Arctic sea ice reached record lows for July.

As well as aptly pointing out that climate change is not just about the future; it’s about the present too.

Too often, climate change is discussed as something to be worried about far off into the future, so far that it dims in importance compared with more pressing concerns. Both the latest global data and the USA’s sweltering summer suggest, however, that the future might be now.