Skip to content
Loading...
How A Small School In Rural Zambia Will Finally Get Electricity
7 Water And Energy Conservation Strategies For Large Families
How 200 Solar Lights Found Their Way To A Small School In Rural Zambia
Ørsted Consolidates Customer Solutions & Bioenergy Divisions
India’s NTPC Limited Offers Solar Power Project Management Services To ISA Members
5 Tips to Make Your First Bike Commute to the Office a Successful One
Congress Charges Ahead on Energy Storage: (BEST) Act
First Round of 15 Winners of Reinventing Cities Competition Announced, Creating New Beacons of Sustainable Design & Construction
5 Major UK Businesses Powered by Renewable Energy
Buy An Electric Car And Save The Planet! Not So Fast, Consider The Alternatives First
Why Do Republicans Now Hate On Christian Morals, National Security, Democracy, The US Constitution, The Rule Of Law, The FBI, The CIA, Honesty, & The US Deficit?
Don The Con & Crew Creating Alternative Reality That Is Almost Completely Fake
Nasty Gas Smells In Long Beach Launch AQMD Long-Term Investigation — We’re There, And It’s About Time!
OceansTsunamis

The March 2011 earthquake and tsunami left devastation along the Japanese coast line that is still being felt to this day. But the resultant tsunami also caused havoc in Antarctica, breaking off several large icebergs from the Sulzberger Ice Shelf. 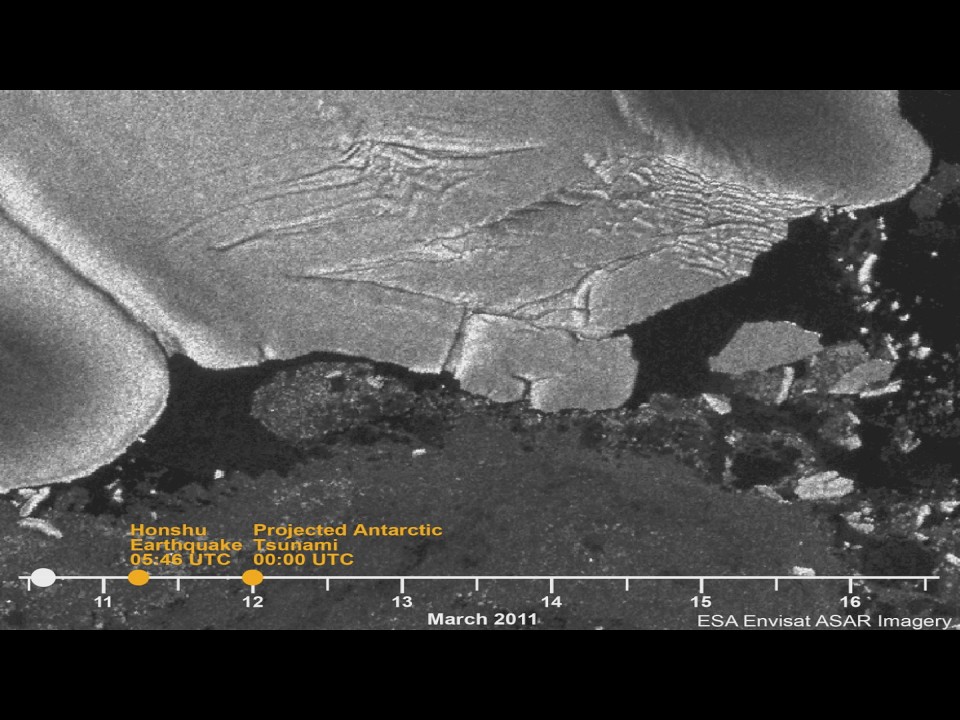 The images were acquired by the Advanced Synthetic Aperture Radar (ASAR) on the European Space Agency’s Envisat satellite, and show how nearly 50 square miles of ice broke off the coast from the waves generated by the Tohoku earthquake.

The waves exploded outward from the epicentre of the Tohoku earthquake, and within 18 hours the waves had travelled 8,000 miles (13,600 kilometers) to the shores of Antarctica.

By the time the waves had reached Antarctica, they were less than a foot in height, but they repeated stress of them were enough to do the damage seen in the video.

The footage is special for a number of reasons. Scientists had long suspected waves could cause an ice shelf to flex and break, but this is the first time that scientists had been able to witness a tsunami affecting an ice shelf. Additionally, scientists usually don’t get to see the footage of an iceberg breaking off; they normally find an iceberg floating off the coast of an ice shelf and have to work back to determine what happened.

That’s why, the moment that Kelly Brunt, a cryosphere specialist at Goddard Space Flight Center in Greenbelt, Md., and colleagues heard of the Japanese earthquake, they looked south.

“In the past, we’ve had calving events where we’ve looked for the source. It’s a reverse scenario — we see a calving and we go looking for a source,” Brunt said. “We knew right away this was one of the biggest events in recent history — we knew there would be enough swell. And this time we had a source.”