Skip to content
Loading...
How A Small School In Rural Zambia Will Finally Get Electricity
7 Water And Energy Conservation Strategies For Large Families
How 200 Solar Lights Found Their Way To A Small School In Rural Zambia
Ørsted Consolidates Customer Solutions & Bioenergy Divisions
India’s NTPC Limited Offers Solar Power Project Management Services To ISA Members
5 Tips to Make Your First Bike Commute to the Office a Successful One
Congress Charges Ahead on Energy Storage: (BEST) Act
First Round of 15 Winners of Reinventing Cities Competition Announced, Creating New Beacons of Sustainable Design & Construction
5 Major UK Businesses Powered by Renewable Energy
Buy An Electric Car And Save The Planet! Not So Fast, Consider The Alternatives First
Why Do Republicans Now Hate On Christian Morals, National Security, Democracy, The US Constitution, The Rule Of Law, The FBI, The CIA, Honesty, & The US Deficit?
Don The Con & Crew Creating Alternative Reality That Is Almost Completely Fake
Nasty Gas Smells In Long Beach Launch AQMD Long-Term Investigation — We’re There, And It’s About Time!
Climate ChangeScience 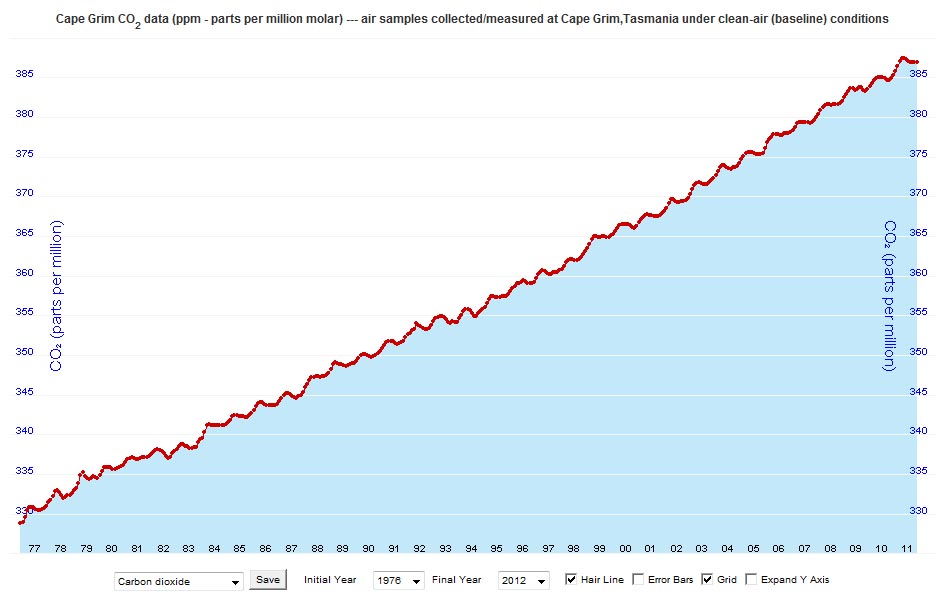 A new CSIRO website allows anyone with an internet connection to view greenhouse gas data measured in the Southern Hemisphere atmosphere for the past 35 years.

The data come from Cape Grim, on the west coast of Tasmania, Australia’s southern island state, which according to CSIRO “is one of the three premier Baseline Air Pollution Stations in the World Meteorological Organization-Global Atmosphere Watch (WMO-GAW) network.”

Baseline Air Pollution Stations “are defined by the WMO to meet a specific set of criteria for measuring greenhouse and ozone depleting gases and aerosols in clean air environments.” The collection of stations are seen below and spread out all across the planet. The Mauna Loa Observatory in Hawaii has been continuously monitoring and collecting data related to atmospheric changes since the 1950s.

“The atmospheric level of carbon dioxide, which is the most important long-lived greenhouse gas influenced by human activities, is at its highest level in more than a million years,” says Dr Paul Fraser from CSIRO Marine and Atmospheric Research, who has been analysing atmospheric greenhouse gas concentrations for more than 35 years. “It is currently increasing at about 0.5 per cent each year.”

Fraser says that it is important to ensure that the community at large has access to data that clearly illustrate the impact human activities are having on the atmosphere.

“The measurements testify to a steady rise in carbon dioxide concentrations in the Earth’s atmosphere, mainly caused by the burning of fossil fuels and deforestation,” he says. “The graphs we’ve made available online will enable people to examine the evidence about the major driver of recent climate change. This is fundamental information in determining the global actions needed to avoid greenhouse gases rising to dangerous levels.”

The website allows users to choose between the three most important greenhouse gases influenced directly by human activities and natural variability: carbon dioxide, methane and nitrous oxide. A user can choose which year to start the graph and which year to finish.

“Together, these measurements allow us to trace the dramatic rise in carbon dioxide levels from about 280 ppm before the start of the industrial era around the year 1800, to 388 ppm in 2010. That’s an increase of almost 40 per cent, largely due to human activities.”