Skip to content
Loading...
How A Small School In Rural Zambia Will Finally Get Electricity
7 Water And Energy Conservation Strategies For Large Families
How 200 Solar Lights Found Their Way To A Small School In Rural Zambia
Ørsted Consolidates Customer Solutions & Bioenergy Divisions
India’s NTPC Limited Offers Solar Power Project Management Services To ISA Members
5 Tips to Make Your First Bike Commute to the Office a Successful One
Congress Charges Ahead on Energy Storage: (BEST) Act
First Round of 15 Winners of Reinventing Cities Competition Announced, Creating New Beacons of Sustainable Design & Construction
5 Major UK Businesses Powered by Renewable Energy
Buy An Electric Car And Save The Planet! Not So Fast, Consider The Alternatives First
Why Do Republicans Now Hate On Christian Morals, National Security, Democracy, The US Constitution, The Rule Of Law, The FBI, The CIA, Honesty, & The US Deficit?
Don The Con & Crew Creating Alternative Reality That Is Almost Completely Fake
Nasty Gas Smells In Long Beach Launch AQMD Long-Term Investigation — We’re There, And It’s About Time!
Disasters & Extreme Weather

The Mississippi River reached 47.87 feet (14.59 meters) in Memphis, Tennessee, on May 10, 2011, according to the Advanced Hydrological Prediction Service (AHPS) of the U.S. National Weather Service. The photos and videos below show just how far-reaching the flooding of the Mississippi River is.

A height of 47.87 feet (14.59 meters) is the highest water level for Memphis since 1937, but unlike back then, an effective flood-control system has helped save most residents from harm.

The top image was taken by the Thematic Mapper on Landsat 5 on May 10, and the bottom image was taken on April 21, 2010. The image clearly shows the muddy waters of the Mississippi pushing over the banks both east and west of the normal river channel, with flood waters spanning the distance between Memphis and West Memphis.

The image above was taken on May 10, 2011, by the Landsat-5 satellite, and depicts the Mississippi River from Cairo, Illinois to Memphis Tennessee.

The following videos are courtesy of the NASA Goddard Space Flight Center and depict various scenes following the Mississippi over the past few days.

Flyover Wabash River to the Ohio River May 2011 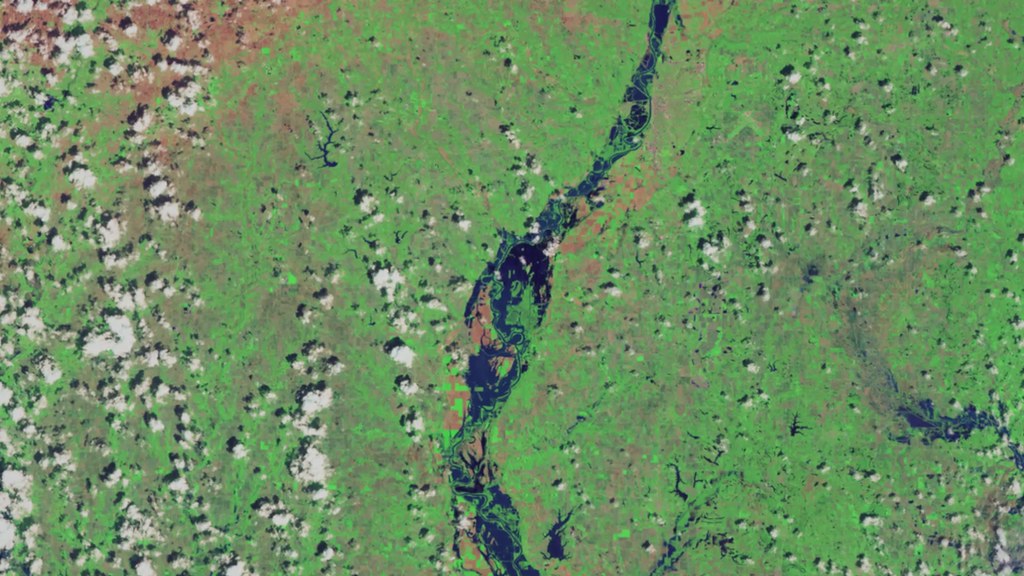 This NASA flyover animation shows the flood scene from May 3, 2011, flying down the Wabash River to the Ohio and thence down to Cairo and the Mississippi Floodway there. 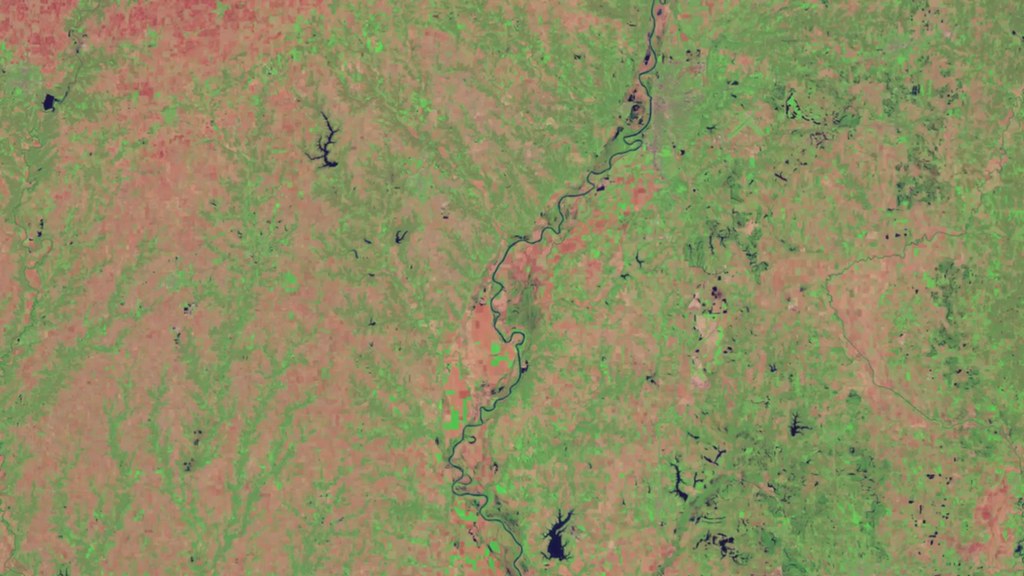 This NASA flyover animation shows the pre-flood scene from April 14, 2010, flying down the Wabash River to the Ohio and thence down to Cairo and the Mississippi.

Flooding at the Junction of the Mississippi and Ohio Rivers 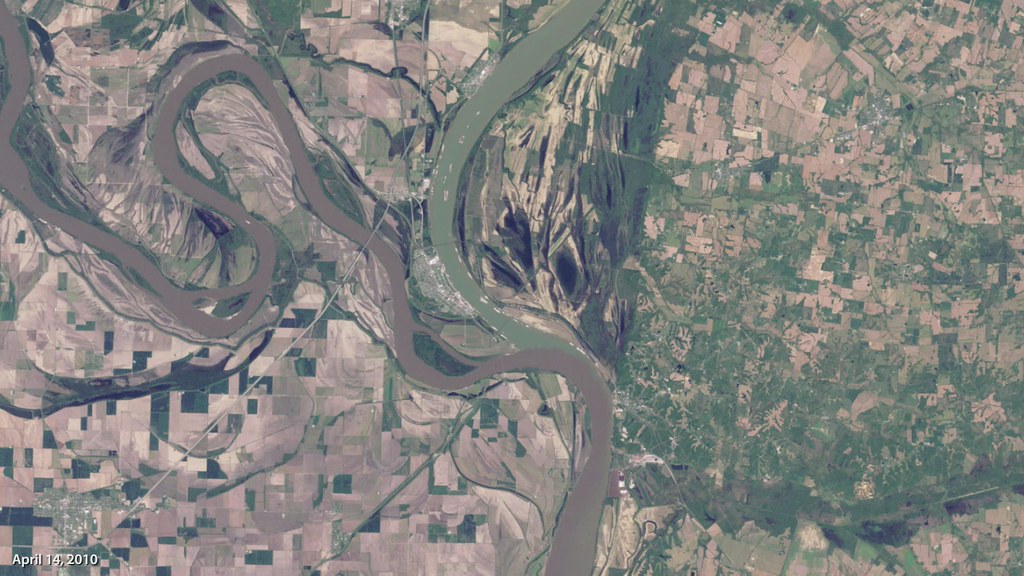 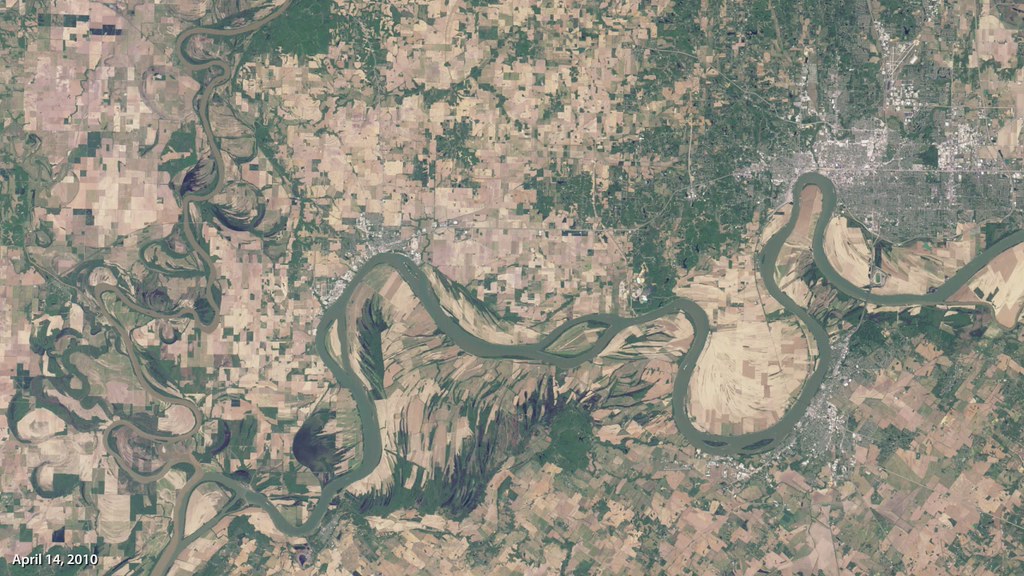 Flooding at the Junction of the Mississippi and Ohio Rivers 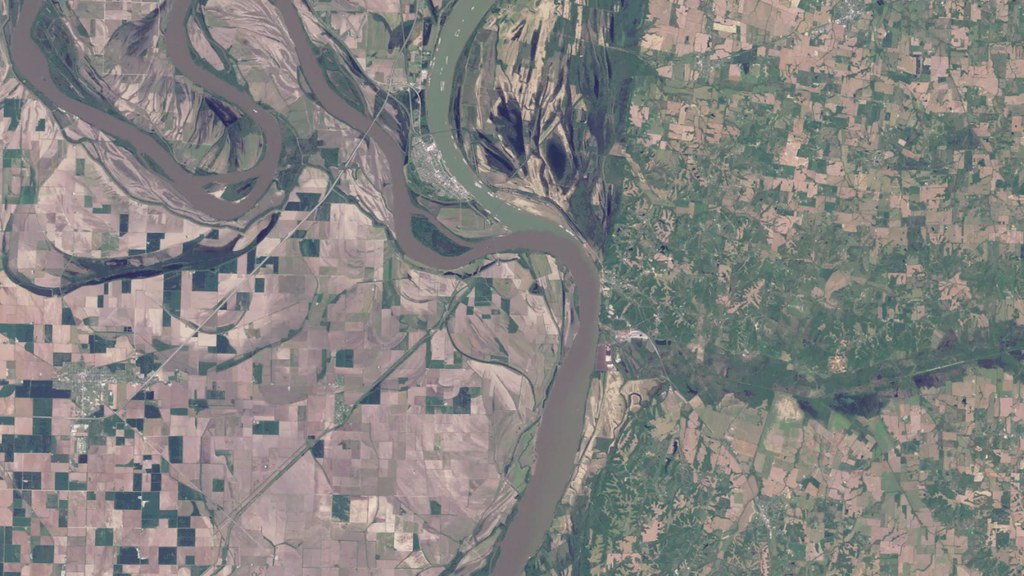