NASA’s Goddard Space Flight Center has produced this map and the following video representing the ozone loss over the Arctic over the beginning of 2010 and 2011. They show the concentrations of ozone over the Arctic as monitored by the Ozone Monitoring Instrument (OMI) onboard NASA’s Aura satellite.

The above image shows march 19, 2010 while the right shows the same date in 2011. The difference is clear, with high levels of ozone in 2010 and low levels in 2011. The video below shows the dynamics of the ozone layer from January 1 to March 23 in both years. 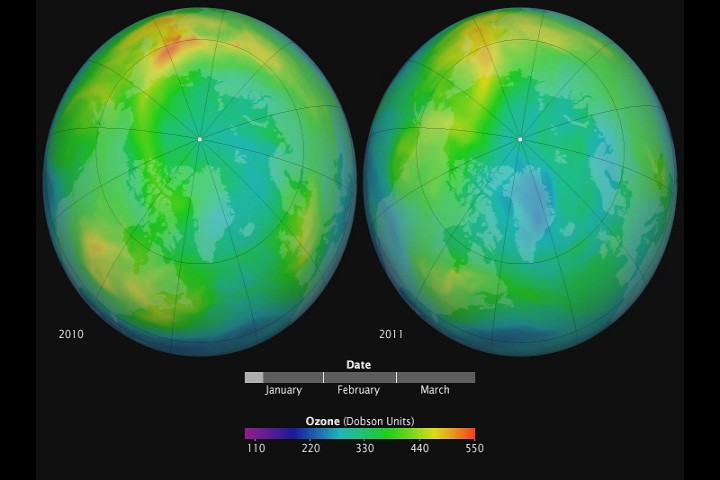 Scientists from Germany’s Alfred Wegener Institute announced  in mid-March of this year that Arctic ozone levels had been cut in half in the later weeks of the Northern Hemisphere’s winter, according to a network of 30 ozone sounding stations spread throughout the Arctic.

“This depletion is not necessarily a big surprise,” said Paul Newman, an atmospheric scientist and ozone expert at NASA’s Goddard Space Flight Center. “The ozone layer remains vulnerable to large depletions because total stratospheric chlorine levels are still high, in spite of the regulation of ozone-depleting substances by the Montreal Protocol. Chlorine levels are declining slowly because ozone-depleting substances have extremely long lifetimes.”

The concentration of ozone in the Arctic atmosphere varies greatly from year-to-year, and ozone “holes” do not form consistently like they do in Antarctica. “Last winter, we had very high lower stratospheric temperatures and ozone levels were very high; this year is just the opposite,” Newman said. “The real question is: Why is this year so dynamically quiet and cold in the stratosphere? That’s a big question with no good answer.”

Scientists will be watching in coming months for possible increases in the intensity of ultraviolet radiation (UV) in the Arctic and mid-latitudes, since ozone is Earth’s natural sunscreen. “We need to wait and see if this will actually happen,” Newman said. “It’s something to look at but it is not catastrophic.”