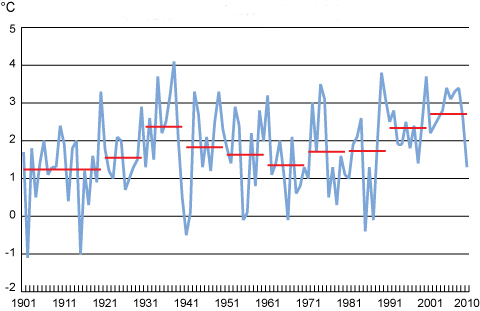 According to statistics from the Finnish Meteorological Institute the first decade of the 21st century was the warmest decade in recorded history, where records were taken all the way back to the 1840s.

When the decade is split into its seasons, the statistics show that the temperatures for all the seasons were amongst the two warmest over the past 160 years. The winter period saw the greatest difference from the average, with the mean temperature in Lapland during winters in 2001 to 2010 over 1.5 degrees higher than normal. The summer temperatures also rose, though not as consistently high, with the average mean temperature for summers between 2001 and 2010 0.5–1° C higher than the average for almost all of Finland over the 1971 to 2000 period.