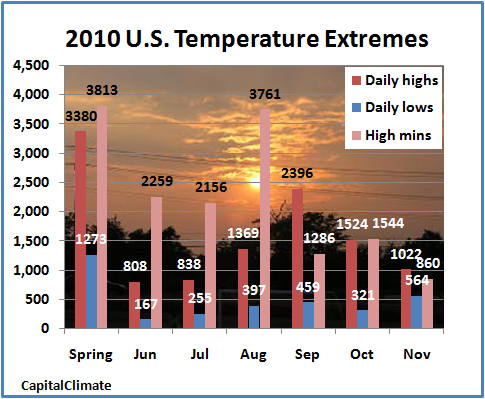 Yes, yes, it’s winter and it’s getting colder, especially here in Europe where I’m living. But November actually turned out to be the hottest November on record globally, according to the latest data from NASA, and 2010 is looking like it will be the hottest year on record after all, despite the fact that we are in the deepest solar minimum in a century.

Additionally, this is despite La Niña, which should be cooling things down considerably.

Even in the U.S., it’s clear that the pattern is one of heating, not cooling. Using NOAA data, Steve Scolnik at Capital Climate found that daily record highs outpaced by daily record lows again in November.

As they have for every month in 2010 except January and February, U.S. daily maximum temperature records far exceeded minimum records in November. Thanks to a cold surge in the last week of the month, the ratio of heat records to cold records declined to 1.8:1, but the ratio of 2.7:1 for the year to date is still well above that of the most recent decade.

Heat records dominated cold records by a wide margin for most of the month, reaching a peak of 126 on the 23rd. Daily cold records, on the other hand, peaked at 90 on the 25th.

If you compare this 2.7:1 ratio to the past six decades via this graph from the University Corporation for Atmospheric Research, you see the warming from an even larger time scale:

The heating, or “warming,” is clear — climate change or global warming or global weirding is here (though, it could get a lot worse). For more on these topics, check out: NASA: Hottest November on record, 2010 likely hottest year on record globally — despite deepest solar minimum in a century.