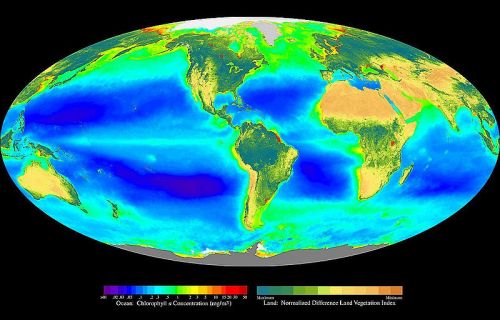 According to the theory, an increase in atmospheric CO2 (the main GHG responsible for global warming) will have an enhancing effect on forest growth, since plants and trees require CO2 to synthesize fuel (sugar, via photosynthesis) and experience growth. Thus, this excess CO2 is “fertilizing” tree growth, which in turn means more growth, which means more CO2 uptake (and carbon sequestration), etc.

This is essentially a “negative feedback” theory (where an effect is canceled out by another effect). The implication of this theory is that increases in atmospheric CO2 are not a matter of much concern (assuming that we don’t cut down most  of the forests) since increases will be offset by increased CO2 absorption by trees and plants (a factor in net primary production, or NPP).

There had been some short-term data that seemed to support this theory. However, according to results from an 11 year field experiment conducted by an American-Australian team of climatologists (Norby et al), this putative CO2 enhancement effect was only temporary and constrained by nitrogen availability.

Conducting what is known as a “free-air CO2 enrichment” (FACE) experiment, researchers sought to determine the effect of nitrogen availability on net primary production (NPP) in a deciduous Liquidambar styraciflua (sweetgum) forest stand in Tennessee. They then exposed the trees to 550 parts per million (ppm) of CO2 (a much higher level than currently exists).

Quoting from the paper: “During the first 6 y[ears] of the experiment, NPP was significantly enhanced in forest plots exposed to 550 ppm CO2 compared with NPP in plots in current ambient CO2, and this was a consistent and sustained response. However, the enhancement of NPP under elevated CO2 declined from 24% in 2001–2003 to 9% in 2008.” (Italics added)

Conducting a nitrogen (N) budget analysis (collecting and/or measuring actual biomass) confirmed that nitrogen availability was limiting to tree growth and declined over time. This was determined by leaf- and stand-level observations and which “provided mechanistic evidence that declining N availability constrained the tree response to elevated CO2.”

This observational data was consistent with stand-level model projections.

Quoting from the paper’s abstract: “Global analyses that assume a sustained CO2 fertilization effect are no longer supported by this FACE experiment.”

About the Nitrogen (N) Cycle:

The  nitrogen cycle is the process by which nitrogen is converted between its various chemical forms. Nitrogen is crucial for biological growth. Although N is the most plentiful gas in our atmosphere, it is mostly (in this form) unavailable for biological production.

Nitrogen “fixing”, which is the making of nitrogen “bio-available” (putting it into a form that is usable), can be accomplished by biological and non-biological processes. Minerilization is one non-biological process that alters N2 (the atmospheric form) and combines it with other elements in the soil. Specialized bacteria (such as the rhizobium bacteria) that live in the roots of many plants (legumes mostly), are the main biological source of N fixation.

Fungus decomposition of plant and animal matter returns nitrogen to the atmosphere.

Human activities such as fossil fuel combustion, use of artificial nitrogen fertilizers, and release of nitrogen in waste water have dramatically altered the global nitrogen cycle (wikipedia).

Top Image:  Global oceanic and terrestrial photoautotroph abundance, from September 1997 to August 2000. As an estimate of autotroph biomass, it is only a rough indicator of primary production potential, and not an actual estimate of it. Provided by the SeaWiFS Project, NASA/Goddard Space Flight Center and ORBIMAGE.