Skip to content
Loading...
How A Small School In Rural Zambia Will Finally Get Electricity
7 Water And Energy Conservation Strategies For Large Families
How 200 Solar Lights Found Their Way To A Small School In Rural Zambia
Ørsted Consolidates Customer Solutions & Bioenergy Divisions
India’s NTPC Limited Offers Solar Power Project Management Services To ISA Members
5 Tips to Make Your First Bike Commute to the Office a Successful One
Congress Charges Ahead on Energy Storage: (BEST) Act
First Round of 15 Winners of Reinventing Cities Competition Announced, Creating New Beacons of Sustainable Design & Construction
5 Major UK Businesses Powered by Renewable Energy
Buy An Electric Car And Save The Planet! Not So Fast, Consider The Alternatives First
Why Do Republicans Now Hate On Christian Morals, National Security, Democracy, The US Constitution, The Rule Of Law, The FBI, The CIA, Honesty, & The US Deficit?
Don The Con & Crew Creating Alternative Reality That Is Almost Completely Fake
Nasty Gas Smells In Long Beach Launch AQMD Long-Term Investigation — We’re There, And It’s About Time!
ActivismDirty Energy & Fuel 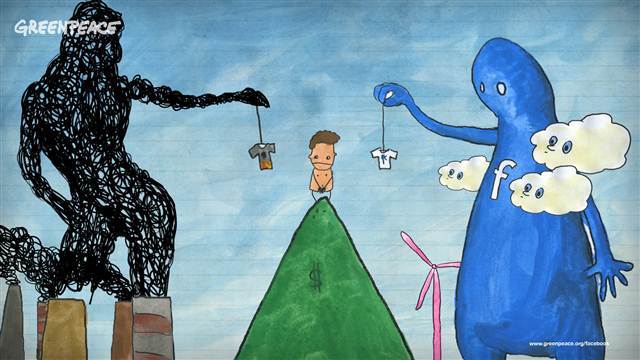 We’ve covered a big Greenpeace campaign pushing Facebook to “Unfriend Coal” previously here on Planetsave (see: Facebook Unfriend Coal Campaign Video (Brilliant & Super Cute) and Greenpeace, Facebook Convo on Coal, Renewable Energy, and Power). It seems Facebook is getting the message that it needs to green its activities a bit more (or at least it gets the point that the environment we rely on to live and live healthily is important and people care about it), as it has just launched an official “Green” page highlighting some of its green actions and other green news, but Facebook still hasn’t adequately responded to its coal problem.

As Greenpeace writes, “Hopefully the page, and the energy-saving initiatives it describes, is a sign that the company is beginning to seriously consider its environmental impact – not only cost-saving measures. But when – and why not?! – will Facebook commit to stop using polluting coal power?”

It is great that Facebook is taking some measures to be green, but who isn’t these days? And unless it commits to getting off coal, I can’t help but feel that this Green Facebook page has a bit of a greenwash flavor to it.

Here’s a good suggestion from Greenpeace on how to further push Facebook to really go green (in addition to joining its Unfriend Coal campaign):

If you have a minute free now, it would be great if you could join in the conversation on that new Facebook page:

2. Leave a comment below any wall update about Facebook’s energy efficiency. Applaud their efforts (really – everything helps and they’re making an effort). But ask them to go further and commit to stop using coal. Something short, polite, and to the point would be best. You can visit our campaign homepage for ideas.

Great advice. I just followed it and suggest you do so, too!