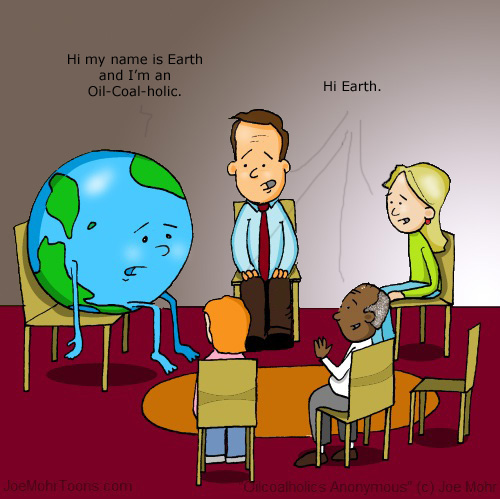 For better and worse we live in an in-between time.
A trying-to-get-clean time.
A turn-our-backs-on-coal-and-oil-and-change-the-scene-to-green time.
(sorry)

Earth will soon realize (or maybe she already has) that as she fights her addiction, some of the people she thought were friends will try to keep her on the “junk.” They’ll tell her that it’s not bad for her and that anyone who tells her otherwise is not her real friend.

Her other friends will try to show her that it is better for her to take the new road, the more difficult road of coming clean and starting anew. Sure, there are questions yet to be answered, and she has known the old way for such a long time, but they will tell her that if she sticks with it, in the end she will live a more productive and healthy life as a clean Earth.

Of course, those two groups of friends will vehemently argue and oppose one another. Lies will be told. Name-calling will be commonplace and confusion will be the norm. But, as Earth realizes what is right for her, and which friends to trust, she will come out of this in-between time happy and healthy, and well on her way to a cleaner, smarter future.

Our future is exciting. It’s just tough sometimes to be living in this in-between time, having to listen to the anger and deception.

Since I began this piece with some light-verse of my own, I will end it with a poem from W.H. Auden — who may best sum up the stance of those trying to keep the earth in its current state of environmental degradation.