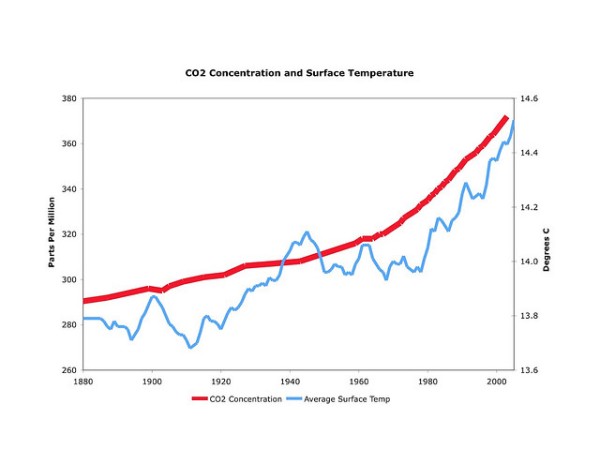 As good of a summary on global warming as you can find.

You can read what green bloggers have to write about global warming all day, but when a top hedge fund manager gives you a 5-minute summary of global warming and what we should think and do about it (and completely nails the matter), that’s something else.

Jeremy Grantham, a leader in the investment field, gives us just that in a 13-point list (+ postscript) that’s part of his second quarter letter to investors.

For the full read, “Everything You Need to Know About Global Warming in 5 Minutes” is on the 7th page of this letter [PDF].

Here are a few fun and dead-on points from the summary:

5) Skeptics argue that this wide range of uncertainty about future temperature changes lowers the need to act: “Why spend money when you’re not certain?” But since the penalties can rise at an accelerating rate at the tail, a wider range implies a greater risk (and a greater expected value of the costs.) This is logically and mathematically rigorous and yet is still argued.

6) Pascal asks the question: What is the expected value of a very small chance of an infi nite loss? And, he answers, “Infinite.” In this example, what is the cost of lowering CO2 output and having the long-term effect of increasing CO2 turn out to be nominal? The cost appears to be equal to foregoing, once in your life, six months’ to one year’s global growth – 2% to 4% or less. The benefi ts, even with no warming, include: energy independence from the Middle East; more jobs, since wind and solar power and increased efficiency are more labor-intensive than another coal-fi red power plant; less pollution of streams and air; and an early leadership role for the U.S. in industries that will inevitably become important. Conversely, what are the costs of not acting on prevention when the results turn out to be serious: costs that may dwarf those for prevention; and probable political destabilization from droughts, famine, mass migrations, and even war. And, to Pascal’s real point, what might be the cost at the very extreme end of the distribution: defi nitely life changing, possibly life threatening.

7) The biggest cost of all from global warming is likely to be the accumulated loss of biodiversity. This features nowhere in economic cost-benefi t analysis because, not surprisingly, it is hard to put a price on that which is priceless.

8) A special word on the right-leaning think tanks: As libertarians, they abhor the need for government spending or even governmental leadership, which in their opinion is best left to private enterprise. In general, this may be an excellent idea. But global warming is a classic tragedy of the commons – seeking your own individual advantage, for once, does not lead to the common good, and the problem desperately needs government leadership and regulation. Sensing this, these think tanks have allowed their drive for desirable policy to trump science. Not a good idea.

Ok, a couple more because these are so good, but I encourage you to read the full letter!

10) Conspiracy theorists claim to believe that global warming is a carefully constructed hoax driven by scientists desperate for … what? Being needled by nonscientifi c newspaper reports, by blogs, and by right-wing politicians and think tanks? Most hard scientists hate themselves or their colleagues for being in the news. Being a climate scientist spokesman has already become a hindrance to an academic career, including tenure. I have a much simpler but plausible “conspiracy theory”: that fossil energy companies, driven by the need to protect hundreds of billions of dollars of profi ts, encourage obfuscation of the inconvenient scientific results.

11) Why are we arguing the issue? Challenging vested interests as powerful as the oil and coal lobbies was never going to be easy. Scientists are not naturally aggressive defenders of arguments. In short, they are conservatives by training: never, ever risk overstating your ideas. The skeptics are far, far more determined and expert propagandists to boot. They are also well funded. That smoking caused cancer was obfuscated deliberately and effectively for 20 years at a cost of hundreds of thousands of extra deaths. We know that for certain now, yet those who caused this fatal delay have never been held accountable. The profi ts of the oil and coal industry make tobacco’s resources look like a rounding error. In some notable cases, the obfuscators of global warming actually use the same “experts” as the tobacco industry did! The obfuscators’ simple and direct motivation – making money in the near term, which anyone can relate to – combined with their resources and, as it turns out, propaganda talents, have meant that we are arguing the science long after it has been nailed down. I, for one, admire them for their P.R. skills, while wondering, as always: “Have they no grandchildren?”

Great, yet surprising (given who they are coming from), editorials and letters on this matter of global warming keep coming (see: Excellent Article in National Post about Climate Deniers, Written by a Conservative here on Planetsave and Stavins and Schmalensee: “‘Demonizing cap-and-trade in the short term will turn out to be a mistake with serious long-term consequences for the economy, for business, and for consumers'” on ClimateProgress). Expect more and more of these as the problems become more and more apparent.

Check out one of our top articles on the causes and effects of global warming for more on these problems and what’s affecting them.