Skip to content
Loading...
How A Small School In Rural Zambia Will Finally Get Electricity
7 Water And Energy Conservation Strategies For Large Families
How 200 Solar Lights Found Their Way To A Small School In Rural Zambia
Ørsted Consolidates Customer Solutions & Bioenergy Divisions
India’s NTPC Limited Offers Solar Power Project Management Services To ISA Members
5 Tips to Make Your First Bike Commute to the Office a Successful One
Congress Charges Ahead on Energy Storage: (BEST) Act
First Round of 15 Winners of Reinventing Cities Competition Announced, Creating New Beacons of Sustainable Design & Construction
5 Major UK Businesses Powered by Renewable Energy
Buy An Electric Car And Save The Planet! Not So Fast, Consider The Alternatives First
Why Do Republicans Now Hate On Christian Morals, National Security, Democracy, The US Constitution, The Rule Of Law, The FBI, The CIA, Honesty, & The US Deficit?
Don The Con & Crew Creating Alternative Reality That Is Almost Completely Fake
Nasty Gas Smells In Long Beach Launch AQMD Long-Term Investigation — We’re There, And It’s About Time!
Oil SpillsScience 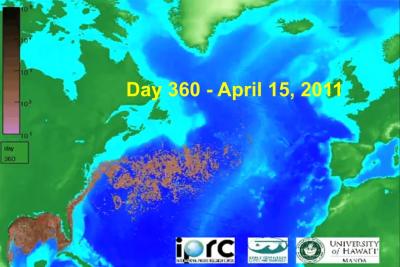 A computer simulation of the possible spread of the Deepwater Horizon oil spill over the course of a full year has been released.

Created by researchers from the School of Ocean and Earth Science and Technology (SOEST) at the University of Hawaii at Manoa, the animation is not a detailed specific prediction but rather, as they describe, “a scenario that could help guide research and mitigation efforts.”

“After one year, about 20% of the particles initially released at the Deepwater Horizon location have been transported through the Straits of Florida and into the open Atlantic,” explains Axel Timmermann from the International Pacific Research Center in SOEST.

The simulation was created by releasing eight million buoyant particles continuously from April 20 to September 17, 2010, at the location of the Deepwater Horizon oil rig in a simulation conducted with the high-resolution Ocean General Circulation Model for the Earth Simulator.

“The paths of the particles were calculated in 8 typical OFES years over 360 days from the beginning of the spill,” says Fabian Schloesser, a PhD student from the Department of Oceanography in SOEST, who worked on these simulations with Timmermann and Oliver Elison Timm from the International Pacific Research Center. “From these 8 typical years, 5 were selected to create an animation for which the calculated extent of the spill best matches current observational estimates.”

The oil spreads initially in the Gulf of Mexico, then enters the Loop Current and the narrow Florida Current, and finally the Gulf Stream. The animation suggests that coastlines near the Carolinas, Georgia, and Northern Florida could possibly see effects of the oil spill as early as October of this year while the subtropical gyre is likely to spread a substantially diluted mess towards Europe.

Source: University of Hawaii at Manoa