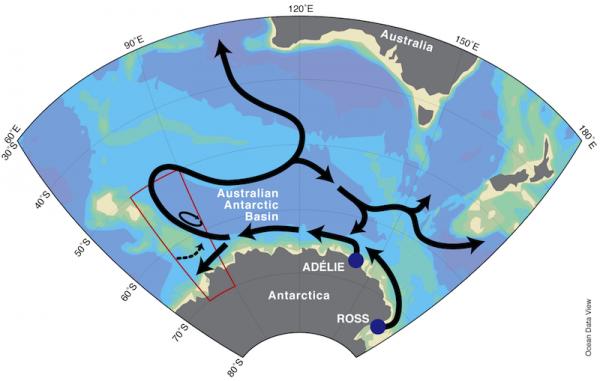 Ocean currents are one of the driving forces behind our planet’s climate, and according to Japanese and Australian scientists a new current has been discovered in the Indian Ocean sector of the Southern Ocean.

In a paper published in Nature Geoscience the researchers describe an ocean current, approximately 4,200 kilometres south-west of Perth, Australia, that is the equivalent of 40 Amazon Rivers and exists at more than three kilometres below the Ocean’s surface.

“The current carries dense, oxygen-rich water that sinks near Antarctica to the deep ocean basins further north,” says co-author Dr Steve Rintoul from the Antarctic Climate and Ecosystems CRC and CSIRO’s Wealth from Oceans Flagship. “Without this supply of Antarctic water, the deepest levels of the ocean would have little oxygen.

“The ocean influences climate by storing and transporting heat and carbon dioxide — the more the ocean stores, the slower the rate of climate change. The deep current along the Kerguelen Plateau is part of a global system of ocean currents called the overturning circulation, which determines how much heat and carbon the ocean can soak up.”

Using current-meter moorings anchored to the sea floor at depths of up to 4500 meters, the joint Japanese-Australian experiment measured current speed, temperature and salinity for a two-year period.

“The continuous measurements provided by the moorings allow us, for the first time, to determine how much water the deep current carries to the north,” Dr Rintoul said. The current was found to carry more than 12 million cubic metres per second of Antarctic water colder than 0 °C (because of the salt dissolved in sea water, the ocean does not freeze until the temperature gets close to -2 °C).

“It was a real surprise to see how strong the flow was at this location. With two-year average speeds of more than 20cm per second, these are the strongest mean currents ever measured at depths three kilometres below the sea surface.

“Mapping the deep current systems is an important step in understanding the global network of ocean currents that influence climate, now and in the future. Our results show that the deep currents near the Kerguelen Plateau make a large contribution to this global ocean circulation,” Dr Rintoul said.